I’m known as a close up magician who performs in restaurants and private parties. I’ve also performed on large stages and theatres of up to 2000 people, toured in the UK and the US with a large scale magic shows too.

I only stepped foot on a stage when I was 30 and had no formal training in performance or magic. I needed to make money so I could eat and, due to a series of unfortunate personal challenges, I was unemployable. So I felt I had 3 options: Fashion, Beauty Therapy or Show Business. These are the only industries that might be able to cope with awkward people like me.

I’d tried fashion and it was quite clear that I had no talent, neither did I fancy being a 30yo hairdresser’s assistant so… show business won. Couldn’t sing a note, too inflexible for acrobatics, juggling would take how long to learn? A terrible memory for lines so acting was out. What was left?

I saw a man being cut in half, so i thought somebody would want to see that wouldn’t they? No. But the little tricks I’d learnt along the way seemed to have some currency. I was being invited to a lot of parties and people were clapping at the small tricks I was doing. If they were clapping it meant I could get paid.

I ended up working the tables of the rich and infamous at the Hippodrome, the world’s largest Disco. Then one thing led to another… Eric Clapton’s 40th birthday, Freddie Mercury’s birthday, Sting’s wedding, Diana’s Christmas party, Eugenie’s engagement party. 40 years have flown by.

The first big party I worked at was Eric Clapton’s 40th birthday party People I only knew from afar, seriously famous people, were applauding me. (It was Ringo Starr and John Hurt) and then Patti paid me more money for an evening’s work  than I would get despatching for a week on the motorcycle. 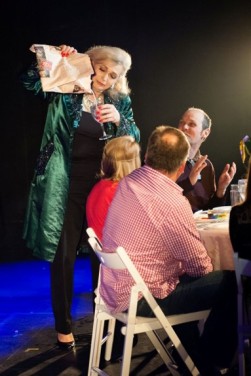 My age, my gender and the rest of the magic community.

God knows. Nobody else was doing what I found myself doing, so I just kept going.

My age, my gender and the rest of the magic community.

Just do it, what’s the worst that can happen?

A few magicians nobody would’ve heard of and Geraldine Chaplin.

Sad fact of life – by the time you get your head together your arse has gone south.

Is there a nice purple? If there is no purple, can I be purple?

Easier to be a big person in a small field than a small person in a big field. Red, Green, Blue and Yellow get used a lot. But when you want purple, you have to come to me.

Catch Fay at the Ned most Wednesdays and Fridays from 8am to 11am, and the Langans same time on Thursdays. If you would like to book Fay or have any questions email her at fay@faypresto.com.